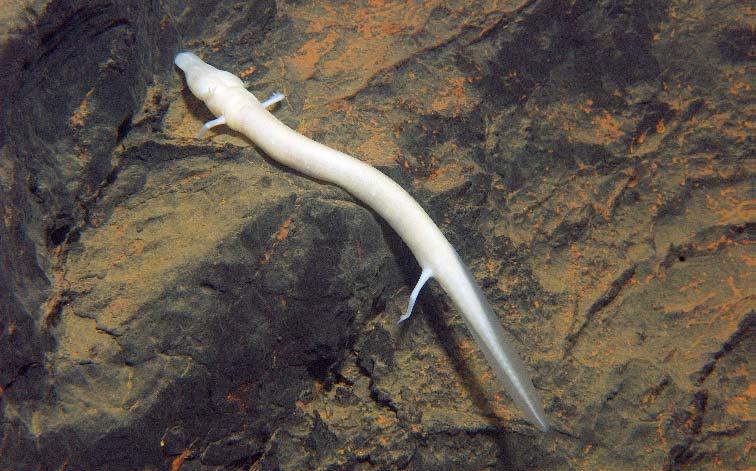 The rolling landscapes and tucked‐away caves of Europe have long been known for their abundance of legends and folklore. But in the case of one tiny animal—the curious olm— truth is, indeed, stranger than fiction.

Read on to learn more about this one‐of‐a‐kind cave dweller.

At home in the aquatic caves

Dark, cold and out of the way, the caves that dot South Central Europe seem like unlikely places to find life. And that they are—but still, one species, the plucky olm, has adapted to make the dingy aquatic caves its home. The olm doesn’t stray far from the caves, with the subterraneous limestone waterways of Slovenia, Croatia, and nearby countries providing ample room to explore and make a home.

In addition to its limited surroundings, the olm is interesting in another way, too—it looks like a larva, a tadpole‐like stage of metamorphosis, throughout its life! Perhaps because it’s not in a hurry to go anywhere, the olm (an amphibian that never leaves the water) enjoys a simpler body and existence.

A penchant for darkness

Without need for sight in its dark surroundings, the olm (which is named after an old German word for “cave”) has no real sense of vision—but more than makes up for it with acute smell and hearing.

As a permanent cave dweller, the olm lacks any pigmentation as well. Its long, slender, slimy body is almost like that of a snake, but has four small feet. Sound odd… or slightly familiar?

To the local people, the olm isn’t an everyday feature of life—unlike a frog or even a fish, this dark‐dwelling amphibian rarely sees the light of day (literally!), and thus wouldn’t have an opportunity to meet very many people. But its introduction in the 17th century was a startling one—after heavy rains washed the olm away from its preferred habitat and into the light, the peculiar creature was thought to be a baby dragon!

It’s easy to see what they saw—after all, what would one expect to make of an oddball creature they’ve never seen before, with a dragon‐like body and near‐mythical appearance?

As you can see, the olm is no ordinary cave dweller. Its penchant for dark, cold cave waters makes it one of the world’s most interesting, far‐removed aquatic animals in the world.

5 Incognito Animals of the Sea Creatures of the Deep: What?s in a Name? The Beast of Busco (and Other Indiana Treasures) Exploring Submarine Sinkholes