The Beast of Busco (and Other Indiana Treasures) 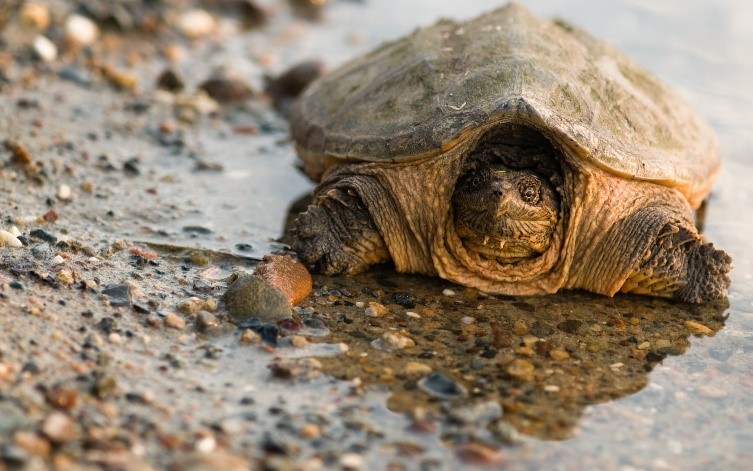 When you think “lake monster,” your mind might jump to menacing eels or sinister, serpentine creatures of the deep.

The Beast of Busco, Indiana, however, tells quite a different story. Named for the town of Churubusco, this legend is not an eel or aquatic dragon, but—as the story goes—a giant snapping turtle.

Of course, the Beast is just one small part of the storied stretch of Indiana waterways. Read on as we learn more about him, as well as the abundance of aquatic charm the Hoosier State’s got in store.

Meet the Beast of Busco

A snapping turtle—even a large one—might not seem like the most menacing lake monster. But the elusive Beast of Bosco has certainly caused lots of trouble around his alleged home of Fulk Lake!

During the late 19th century, a farmer named Oscar Fulk—for which the little lake is named —said he first saw the turtle. When two friends went fishing on the lake 50 years later, they also said they saw a large turtle—around 500 pounds, in their estimation. Though the “Beast” could not yet be corroborated, many tried to prove his existence in the years that followed—including the new farm owner, Gale Harris, who tried to drain the lake to reveal the monster. The dam broke, though, preventing the water from being drained. Another fluke happened in 1949 when an attempt to dive the lake in search of the Beast was foiled by a lack of proper equipment. It seems that throughout the history of the Beast, small slip-ups along the way have ruined chances to reveal him—and maybe, that’s just what he wants.

While the pandemonium surrounding the Beast has since died down, his imprint on local culture is unmissable. A “Turtle Days” festival happens in Churubusco every year—in fact, the city is even nicknamed “Turtle Town!”

While Fulk Lake is on the smaller side (making it unsuited to water sports lovers, open-water anglers or anyone with a fear of snapping turtles), the historic allure of Fulk Lake is complemented by exciting aquatic opportunities in nearby waterways.

Exploring Blue Lake… and beyond

One such body of water is Blue Lake, a Churubusco treasure known for its angling opportunities—there you’ll find pumpkinseed sunfish, bream, sucker, crappie and more.

Of course, if fast-paced thrills are your style, another aquatic haven in the form of Lake Wawasee, Indiana’s largest natural lake where you’ll find a bona fide bounty of water sport thrills. Board, surf, ski—you name it, this spacious lake has plenty of room for you to explore. The aquatic experience here is characterized by wide stretches of beautiful blue-green water, as well as a lush lakeshore speckled with vibrant greenery.

A surreal sunset at Lake Michigan

Of course, if you thought Lake Wawasee was endless, travel over to Indiana’s northern shore and experience Lake Michigan. You don’t need to visit the Windy City of Chicago to admire its famous skyline—just head over to Duneland Beach. Located on the northwest side of the state, the famous dunes don’t just offer you passage to the allure of Lake Michigan boating—they let you see a vivid sunset (a special treat for inland boaters), marked for the mirage-like silhouette of the Chicago skyline on the horizon. The presence of the shadowy cityscape is the only indication that you’re not out by the ocean—the water’s so vast—and it’s sure to be one of the most impressive sights you see on the Great Lakes.

A today’s blog shows us, the Hoosier State’s packed with local charm and gorgeous waterways to enjoy. You just need to know where to look!

Looking for a Liveaboard Marina?