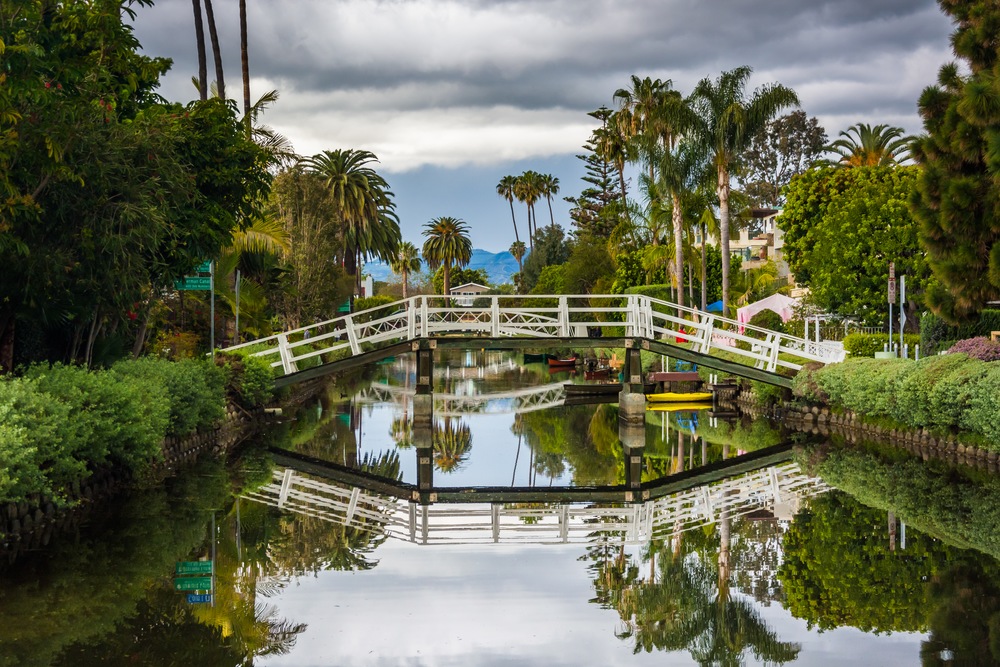 The Venice Canals are beautiful. Effortlessly luxe and convenient for the people who call them “home,” they have attracted the admiration of water lovers across the world—and have even
inspired a few, too. In Los Angeles and its teeming suburbs, you would never quite expect to find the same idyllic, on‐the‐water existence. But in the early 1900s, that’s exactly what local developer Abbot Kinney tried to achieve.

Read on to learn more about the Angelenos’ version of Venetian Paradise… and see how you can visit the result today.

In an effort to mirror the wonder and opulence of the Venice Canals, local developer Abbot Kinney got an idea—he would construct the same sort of canals in California. Los Angeles was warm and sunny—a place where people could be outdoors all year long, and thus the perfect place to reconstruct a sense of laid-back leisure.

While his plan worked, and the picturesque canals opened in 1905, there was one problem that Kinney could not have foreseen—the imminent popularity of automobiles. When the car took off, it became apparent that roads were needed in lieu of more leisurely (but potentially less convenient) canals, and they were eventually filled in.

Before that, of course, the canals were dazzling. You can still seem them represented on vintage postcards of the area. Cozy, blue and beautiful to see up close, the canals truly made Venice, California worthy of its name.

Can you visit the canals today? Well, you might have driven over an old one without ever realizing it—but indeed, you can see some of the beautiful canals in action, if only a fraction of the number there once was. In 1994, the few canals that remained (having withstood the filling of all the others) were refurbished and brought back to their early century glory. Today, you can cruise up the canals in your own personal canoe or kayak to get the full sense of this Venice‐in‐America experience, the culmination of years of history and restorative work.

For bigger boat fun, you’ll want to take your Monterey out to the waters beyond Venice Beach. This fun, eclectic coastal hub is worth exploring on land—then, when you’re ready to head offshore, you can depart from nearby Marina del Rey and enjoy a leisurely cruise up the Southern California coast. It may not be what Kinney himself intended—but the fact that you can still see the canals and enjoy, on a larger scale, the beautiful waterways nearby serves as a testament to our universal love of water.

The Cinematic Charm of California?s Waterways The California Lighthouse Gear Up For A Wakesurfin? Winter In Southern California Boating in Carlsbad, California