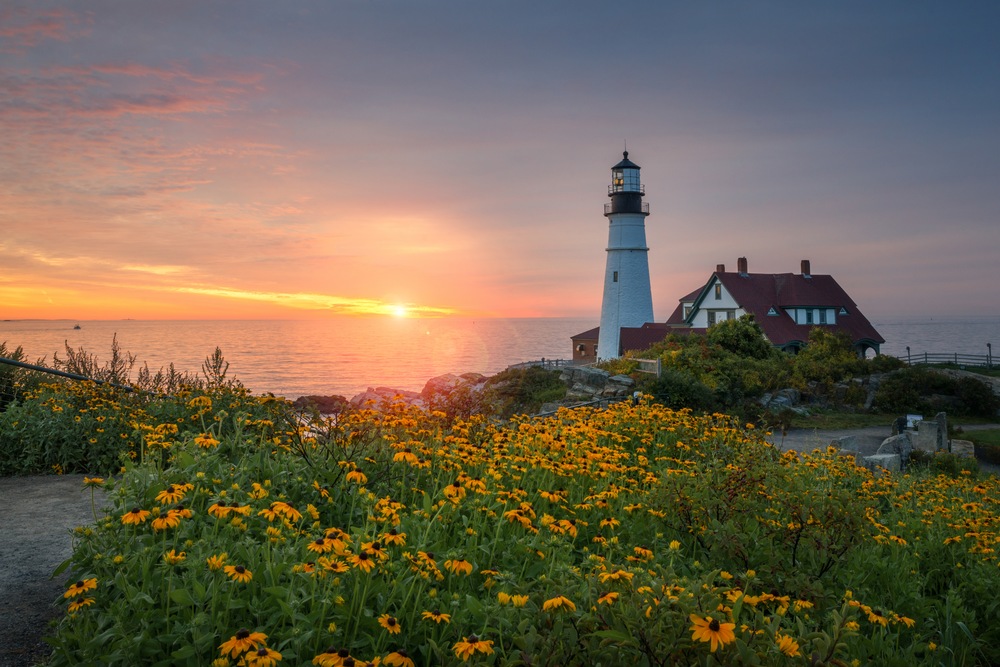 Happy National Lighthouse Day! This August 7th marks the perfect opportunity to go cruising and discover some of the United States’ most beautiful lights. There are storied landmarks as old as the country itself — and a handful that go back even further than that — as well as vibrant lights almost as stunning as the water below. Fortunately, your Monterey lets you see the very best of them all! In honor of the big day, here are some of our favorite lighthouses to add to your on-the-water itinerary this summer.

Located on Boston’s Little Brewster Island, the Boston Light made its debut more than 300 years ago — all the way back in 1716, in fact, when the coastal city was a steadily growing piece of the soon-to-be United States. It went through several rebuilds and restorations due to fires, natural elements, and even attacks by the British during the American Revolution — but the mighty light persevered, as has its significance to boaters and travelers in Boston Harbor to this day.

You can cruise by the Boston Light as you meander along the Boston Harbor Islands: back-to-nature spots that provide a break from the hustle and bustle of city life on land.

Another New England gem, the Portland Head Light stands atop the picturesque crags of Cape Elizabeth, Maine. From a beautiful meadow to sun-kissed hills, the view of the terrain Portland Head calls “home” is just as stunning as the view from the water — as you approach from a long day of cruising Casco Bay, you’ll be greeted by the familiar presence of Maine’s oldest lighthouse beckoning you home.

San Francisco’s Alcatraz Island is a popular tourist destination, the site of a former federal prison — but did you know that it’s also home to the American West Coast’s first lighthouse ever? In fact, the island’s function as a lighthouse and military base predated its use as a prison by about 80 years. If you’re cruising around San Francisco Bay, be sure to look out for the stunning light (as well as the playful, very noisy sea lions who call nearby Pier 39 “home”).

Back over on the East Coast, the Sunshine State’s Ponce de Leon Inlet Lighthouse is another piece of living history you can cruise by this August — and all year long, of course, because summer never really ends over here. The iconic red structure is actually the tallest in Florida, and its first iteration was built all the way back in 1835 — of course, much like the Boston Light up north, war and weather caused the first structure to be rebuilt.

The Ponce de Leon Inlet Lighthouse notably saved the life of author Stephen Crane, who followed the light back to shore following a shipwreck and chronicled the experience in his story, “The Open Boat.”

When you’re not exploring the light on land, you can enjoy the view from the water! This stretch of Florida shoreline is home to some of the state’s best angling opportunities — intracoastal and offshore — as well as surfing and so much more.

The iconic black and white stripes of North Carolina’s Cape Hatteras Lighthouse are sure to be recognized by locals and visitors alike — but a unique design is not the only distinction Cape Hatteras has on other lights. It is actually the tallest brick lighthouse in the country, at nearly 200 feet tall, built to assist sailors in an especially shipwreck-prone part of North Carolina’s coast. Cruise up the shore a bit further for a serene experience in the Outer Banks, where breezy beaches, marshlands, and meandering channels make for a unique on-the-water experience.

Nestled into the side of Oahu’s easternmost sea cliff, you will find Makapuu Point Lighthouse — a charming light you can hike to for stunning ocean views, or one whose façade you can admire from the water below on your very own Monterey! Either way, you’ll want to keep making your way around the island for even more fun in the form of snorkeling and fishing in the Kui Channel, or water sports in one of the local bays.

What is your favorite lighthouse and why? Share your splashing stories and photos, and enjoy a thrilling adventure this National Lighthouse Day and beyond!

Late-Summer Sweets For Your On-The-Water Adventure