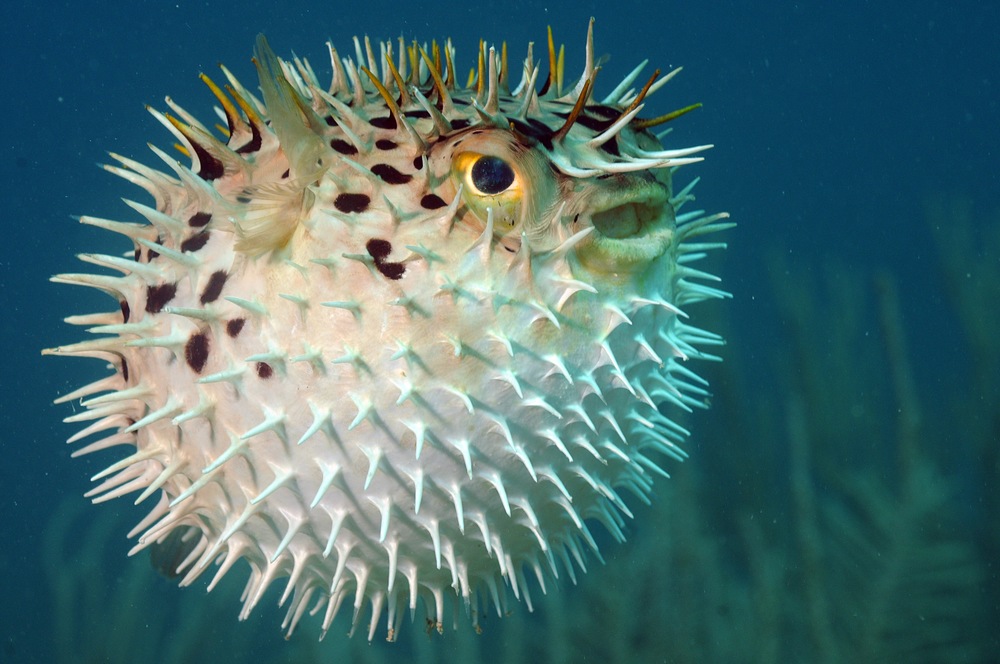 Like a porcupine of the sea, the pufferfish puzzles us and amazes us all at once.

While not every member of the family Tetraodontidae has those infamously long spikes, even the “tamer” of them blow up to near-comic proportions when threatened.

Why is that? And what role does the pufferfish service in its environment—and ours?

In today’s blog, we’re aiming to answer those questions… and then some. Take a look!

Pufferfish are clumsy, oddly-shaped, and among the ocean’s slowest movers. They’re not exactly fearsome—in appearance, anyway—so how do they compensate when faced with predators and outside threats?

They balloon up, of course!

When in immediate danger, the pufferfish can gulp up lots of water—enough to expand itsstomach and grow several times its own size. At the same time, spikes appear and protrude from the fish’s body.

In this state, the pufferfish cannot easily move. What it can do, however, is thwart off outside threats who may lose their appetite upon seeing the odd display. If they’re daring enough to go ahead and chow down anyway, the pufferfish’s body is laden in toxins that will do more than leave a bad taste in the predator’s mouth—they might even poison it, too.

The pufferfish may come from a family whose name, Tetraodontidae, means “four-toothed”—but as you might have already guessed, this fish’s “puff” is worse than its bite! It generally feeds on algae or small invertebrates, using its infamous spikes as a defense mechanism as opposed to a predatory tool.

If so many pufferfish are chock full of toxins, why do they appear on menus as a seafood delicacy at select restaurants?

According to the FDA, pufferfish may be safe to eat if it’s from certain spots: the mid-Atlantic stretch of US coastline (Virginia, New York, etc.), where the majority of fish don’t have said toxins; and Shimonoseki, Japan, where chefs and fish cutters are specially trained to fix the fish in a way that minimizes the risk of toxicity.

Have you ever spotted a pufferfish on the water? Or maybe been brave enough to try some on your international vacation? Let us know below!

Music on Your Monterey