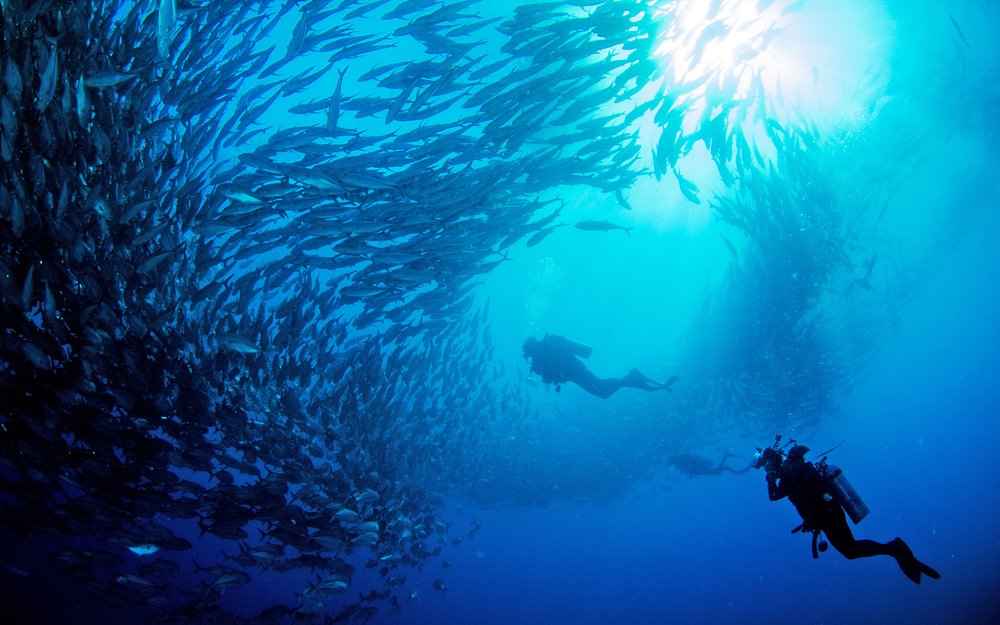 If you’ve ever encountered a school of fish—whether from the edge of your Monterey or on a scuba diving excursion—you likely felt awe and wonder at just how precisely the fish moved together. It’s like you’re watching hundreds of bodies move with one mind!

While a school of fish moving all together may seem impossible, the act of teaming up for feeding, mating or travel through the water is actually a real (and very practical) method that fish use for their survival. In today’s blog, we will be studying this one-of-a-kind phenomenon.

From aggregations to shoals to schools

Not every group of fish you see is a school—although any neatly-packed, precisely moving group you see probably is one! Groups of fish are classified as one of three distinctions (aggregations, shoals, or schools) based on how organized they are and what purposes they serve. For example…

One of the primary reasons that fish stick together is, of course, the defense it provides them. A shoal or school gives fish a chance to blend in, since predators are more likely to notice the “odd man out.” A large group can also look out for one another better than a small one—since so many fish will be on the lookout for predators, the group can more easily avoid the chance of running into one. Finally, it has been suggested that the rapid, coordinated movements of a school of fish may be visually confusing for nearby predators, helping the school to avoid a dangerous encounter.

There are several other distinct advantages that go along with schooling or shoaling. Large groups can more easily find food than small groups or single fish can on their own. These groups also provide a simple route to reproduction, since fish never have to travel far in order to locate a suitable mate. Finally, research suggests that certain fish may benefit physically from simply being part of a group—for example, fish separated from their schools may experience stress and agitation more easily, which can be detrimental to their survival.

We hope that today’s blog has given you a better understanding of fish schools—why they occur, how they work, and how they can benefit fish of many species. The next time you see a group of fish move in uncanny coordination, you’ll know just why they’re doing it… although that, of course, won’t make the sight any less spectacular!

Where is the World?s Largest Volcano?

Lyonesse and the Isles of Scilly: Where Land Meets Legend