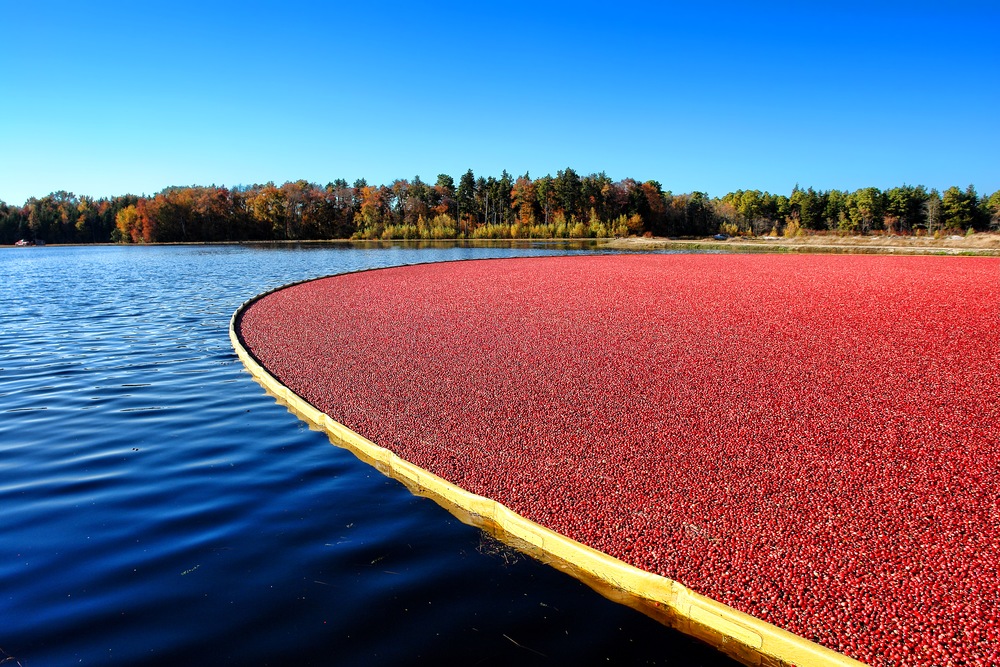 It wouldn’t be Thanksgiving without a side of cranberry sauce at the table. Americans consume more than 5 million gallons of the stuff every holiday season, according to Ocean Spray, and it’s easy to see why! The tart fruit livens up a leftover sandwich and works equally well in sweet and savory applications.

But there’s another side to cranberries that we don’t really think of during the holidays. Unlike apples, pears, or other autumnal favorites, cranberries don’t come from a tree on land — they (a lot like you) love the water! In fact, one brave wakeboarder even cruised through a bog where the tangy fruit was growing — but more on that later.

Just read on as we learn more about cranberries’ aquatic heritage!

What’s In A Name?

Cranberries aren’t just delicious to eat at Thanksgiving — they also have ties to the very people who helped invent the holiday! It was the Pilgrims who first called cranberries, well, cranberries — or, rather, “crane berries,” named for the plant’s blossom that shares an uncanny resemblance with a crane’s head. (Really, look it up for yourself!)

Of course, cranberries existed before English settlers had a name for them. In fact, over the course of their long history in the Americas, indigenous peoples used the fruit in myriad ways — including eating, yes, but also extending to dye and medicinal purposes. And in fact, even to this day, cranberries are praised for their infection-preventing, anti-inflammatory properties — so why not enjoy a little extra juice this Thanksgiving?

Cranberries are grown in bogs, or marshes formed by glacial deposits. You might not know this if you’re only used to handling cranberries in sauce or jelly form, but they’re actually filled with air pockets — making them a particularly buoyant fruit that loves floating in the water, anchored by vines in the soil below! Once it’s time to harvest the cranberries in the fall, the bog is flooded to make it easier to gather up the delicious fruit.

Of course, if you’re someone with a craving for adventure, that autumnal flood might just be the perfect time to take a cruise through the cranberries — like wakeboarder Josh Tranby did in 2016.

Six years ago, Josh Tranby traveled with Red Bull to a cranberry bog in Tomah, Wisconsin, where he was able to wakeboard on a surface filled with floating cranberries. As if it weren’t already fun enough to feel the spray of the wake behind you, Josh’s ride resulted in bursts of cranberries flying through the air — creating a truly stunning display.

However, there’s one catch. The cranberry bog flood is still pretty shallow — too shallow for wakeboarding boats like your Monterey to pull through. Josh was able to do it because his line was actually attached to a high-tech Red Bull winch back on land. But still — pretty fun to see, even if you don’t do it yourself!

And even then, you can still enjoy the beauty of the places these cranberry bogs call “home.” Bandon, Oregon, is particularly known for its production of the tiny, tart fruit — and its gorgeous bogs are located mere minutes inland from the Pacific Coast, where one-of-a-kind rock formations add unique character to the shoreline. Wisconsin, though, is regarded as the Cranberry Capital of the World. You can attend a bog tour or, in some cases, even harvest your own fruit! After a morning of that, the majesty of the Great Lakes awaits for some fun family cruising.

You don’t need to take an extreme ride through the cranberries to appreciate them this Thanksgiving — or any time of year, really! Simply add a scoop of cranberry sauce to a hearty leftover sandwich, then head out to your local lake or beachfront for a delicious fall picnic al fresco.

Finding North Pole On The Water

What Does Your Favorite Thanksgiving Dish Say About Your On-The-Water Personality? Thanksgiving Leftovers: 5 On the Water Ideas The Famous American Military Ships - Part 1 of 3 Annapolis, Maryland and the United States Powerboat Show