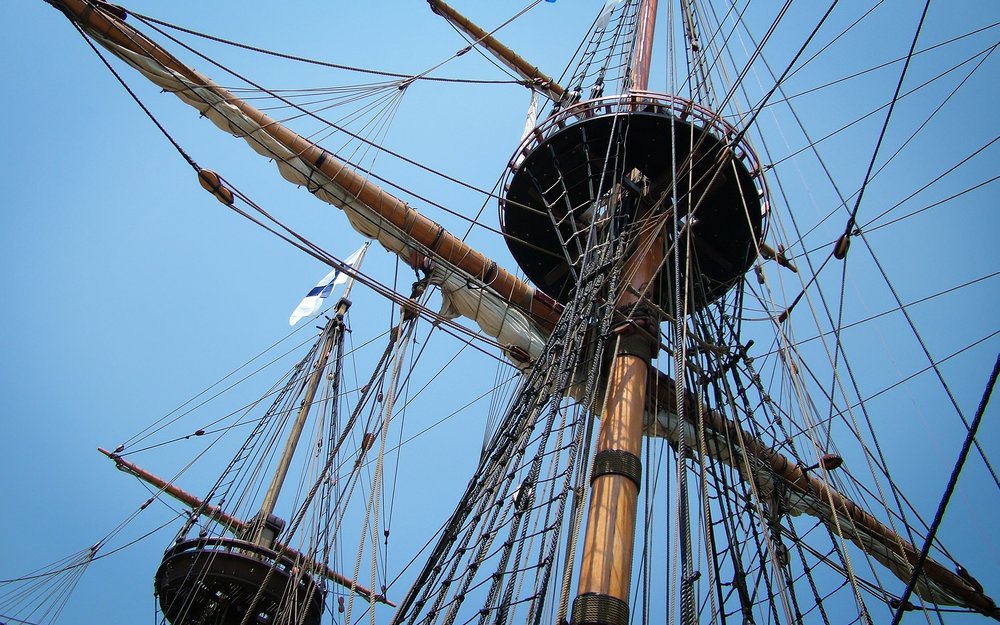 Plymouth Rock. The Pilgrims. The first Thanksgiving feast. We all know the story of Thanksgiving—but without one very famous ship, it’s likely that our country’s history might look very different today!

In honor of Thanksgiving, we’re taking a closer look at the Mayflower, and the instrumental role it played in American history.

It wasn’t intended to carry over the Pilgrims…

The Mayflower was originally used as a cargo ship to transport goods between England and France. In fact, by the time it assumed its most famous role on the fateful 1620 voyage, it was considered an aging ship, and not in the best repair.

…nor was it supposed to go to America alone

The original plan was for the Mayflower to head to America accompanied by another ship, the Speedwell. However, when the Speedwell kept springing leaks, it was determined to be unfit for the transatlantic voyage ahead. Instead of proceeding west, some of its passengers were so discouraged by the leaks and other obstacles that they simply stayed put.

Humans weren’t the only passengers on board

While there was no room for large animals on board, plenty of pigs, poultry and even dogs and cats did come along for the voyage.

A pivotal passenger was almost lost at sea

During the voyage, John Howland fell overboard and into the ocean, but was saved by a rope that had been trailing along in the water. Once an indentured servant, Howland survived and lived to become an influential member of the Plymouth colony, signing the Mayflower Compact and serving as assistant to the colony’s governor, John Carver.

Families were each given one box in which to store their belongings, making the trip a light one without much room for changes of clothes and other luxuries.

Since living space on the ship was so crowded, families used thin sheets of wood to create makeshift “cabins,” which separated them from their neighbors. Compared to today’s travel standards, it certainly seems hard to imagine!

The Mayflower Compact was an early attempt at a constitution

While still on board, The Mayflower Compact was drafted and signed. It set forth fundamental rules and expectations for all to follow to ensure their survival in the New World.

Two babies were born on board

While the voyage was no doubt a difficult one, it did see the arrival of new life—namely, two baby boys born to different families. Oceanus Hopkins was born on the trip itself, and was thus given an appropriate seafaring name. Peregrine White—whose similarly fitting name comes from the Latin word for pilgrim—was born on board after the ship had reached harbor, making him the first Pilgrim to be born in America.

White went on to do big things in the colony—he married, raised a family, and actively involved himself in the colony’s military and government.

The Mayflower originally hoped to sail to the Colony of Virginia farther south, but reached the Cape Cod area first. While the ship tried to turn toward that original destination, bad weather on the water forced it to remain in Massachusetts.

The Mayflower might have been turned into a barn

Many of us have visited Plymouth Rock—but why can’t we see the Mayflower itself? It is said—though often disputed—that the ship was in such disrepair following the death of its captain, Christopher Jones, that its wood was sold as scraps. According to the story, that wood is now part of a barn in Buckinghamshire, England, which has now become somewhat of a tourist destination thanks to its nickname—the Mayflower Barn.

Which of these Mayflower facts surprised you the most? Let us know below—and from our Monterey family to yours, have a very happy Thanksgiving!

Regeneration: How Marine Species Bring Themselves Back to Life

Sailing to America Turkey Day Traditions We Love What Does Your Favorite Thanksgiving Dish Say About Your On-The-Water Personality? Thanksgiving Leftovers: 5 On the Water Ideas