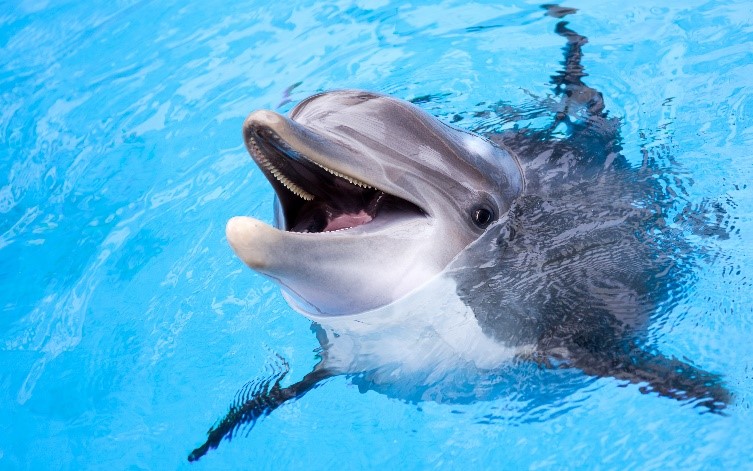 Smart, friendly and always sporting a famous smile, dolphins are like extensions of ourselves —friends we’re happy to catch up with as we swim, boat and watch the water.

We’re taking a closer look at this friendly face of the sea—as well as a few tips for boating by (and interacting with) dolphins in the wild. Just read on!

Get to know the family

When we talk about dolphins, most of us are probably referring to the ubiquitous bottlenose—named for its slender snout, this dolphin can be found in waters across the globe, from Florida to Australia to the United Kingdom. Of course, while it’s the most common dolphin, it’s not the only one – the aptly-named Atlantic spotted dolphin, for example, can be found throughout the Gulf Stream, while the Amazon River dolphin stands out thanks to its bubblegum-pink coloring. And while the black and white orca is commonly referred to as a “killer whale,” it, too, is a dolphin—the largest member of its family, in fact. (If you look at the shape of the orca, it indeed shares many more similarities with traditional dolphins than it does with humpback or blue whales.)

As the most common member of its family, we’re used to seeing the friendly smile of the bottlenose dolphin…but is it really a smile?

While the natural shape of the bottlenose’s upturned mouth is, in fact, what gives the dolphin that characteristic “smile,” we’ve no reason to believe dolphins aren’t happy when we see them. In fact, research suggests that dolphins are social, playful and easygoing. They tend to hang out together in pods, or groups and have an affinity for getting up-close and personal to each other and, as it turns out, to humans. They often poke their heads up, both to catch some air and to meet nearby boaters and swimmers—while underwater, the social dolphins use a system of whistles and clicking sounds to talk to each other. Each often has its own signature sound, a name of sorts that can be used to identify one another.

To make swimming easier, you’ll sometimes catch dolphins bow riding – moving through the water behind the wake of a large boat or ship, twisting and “surfing” as they go. So if you ever happen to be boating where dolphins frequent (generally close to bays, gulfs and other close-to-shore stretches of warm water), turn around and see if you can spot any playful dolphins hitching a ride.

Boating with the dolphins

While you can often spot dolphins from shore, one of the best ways to get even closer is to boat out and see them at play. If you do stumble upon a dolphin (or its pod), slow your speed—or come to a stop altogether, as you’ll likely want to do—and let it approach you. The dolphin might just want to come over and say “hi”—we’ve even seen videos of them interacting with four-legged friends on board!

When you’re close to the coastal areas that dolphins like to hang out in, you can also use your boat as a starting-off point for a snorkeling adventure, putting yourself as close as possible to the water and the dolphins themselves, should they come by for a swim.

The cheery, playful dolphin is a welcome sight to enjoy on your Monterey adventures. Now that you know a bit more about this marine mainstay, keep an eye out for pods on the horizon—you never know when you’ll spot those famous tails and friendly smiles!

Wakeboarding: Where, When and Why Not?

There Is A Dolphin Near My Monterey Boat: The NOAA SMART Program Must-Do Havasu: 10 Ways to Enjoy a Spring Break Paradise Beautiful Fort Walton Beach Florida! Hanging with the Dolphins