The United States Congress appropriated $35,000 for a new lighthouse at Big Sable Point in 1866 while the State of Michigan dedicated more than 900 acres for the lighthouse. Construction on the lighthouse began in 1867 and was completed later that year, it was the first lighthouse built in the area, and all materials had to be carried in on ships since the area did not have roads until 1933.

The original lighthouse began to deteriorate in the late 1800’s forcing lighthouse officials to cover the yellow brick with boiler plates. However, the boilerplates made the lighthouse difficult to see and was later altered with a daymark. A historical post card depicts the lighthouse being red and white at one time. Today it is painted white with a black band around the tower. The lighthouse was the last lighthouse in the Great Lakes Region to become fully automated, including plumbing in the 1940s. Big Sable Point Lighthouse was placed on the National Register of Historic Places in 1983. 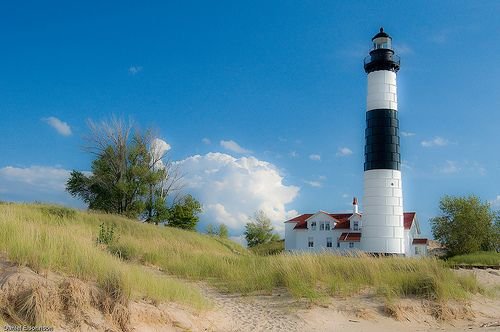