We’re visiting the Borden Flats Lighthouse in Fall River, Massachusetts on this week’s Lighthouse Tour! The lighthouse was built in 1881 and was added to the National Register of Historic Places in June of 1987. Do you know what style of architecture is represented in this lighthouse? Share your answers with us in our comments section or on Facebook, and keep reading today’s blog.

A lighthouse in Fall River, Massachusetts became a necessity during the mid-19th Century when a steamboat service to nearby New York City and Providence, Rhode Island became a regularly scheduled item. An extremely dangerous reef is located just off the Fall River shore and had been previously marked by a beacon until the construction of the lighthouse in 1881.

The lighthouse survived the hurricane of 1938, but was left with a tilt, which it still has to this day. 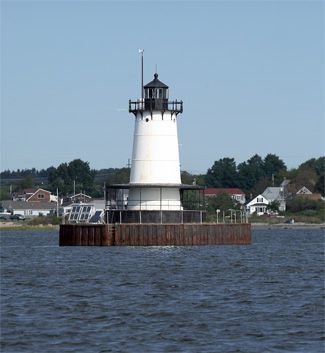 The Wharf Boat and Yacht Show