After we were done visiting our dealer Marine Specialties, we decided to take a trip to the Alcatraz Lighthouse in California! Alcatraz Island was first explored by Juan de Ayala who arrived in the San Francisco Bay in 1775. He named the island, “Isla de los Alcatraces” due to large amounts of pelicans inhabiting the island.

In 1851 and 1852 congress signed a contract with Gibbons and Kelly, a firm from Baltimore to build six lighthouses on the California coast. The lighthouses were needed at Point Loma, Alcatraz Island, Fort Point, Point Pinos, Humboldt Bay and Farallon Island. The firm worked on and completed the Alcaztraz Lighthouse in July of 1853. The lighthouse’s Fresnel lens finally arrived in 1854 and was lit on June 1st. At the time the Lighthouse Board raised their standards to require a Fresnel lens on all lighthouses. This new standard meant a lens had to be shipped more than 12,000 miles from the East Coast, around the tip of South America to the West Coast. Despite minor equipment setbacks, the Alcatraz Lighthouse was the first lighthouse to be completed, and the first navigational lighthouse on the West coast of the United States. 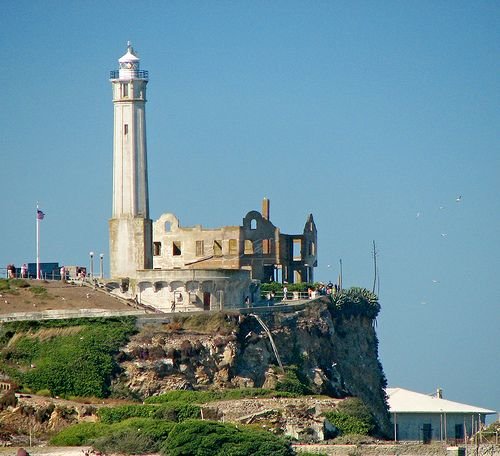 Adventuring the Sea with Awilda the Pirate