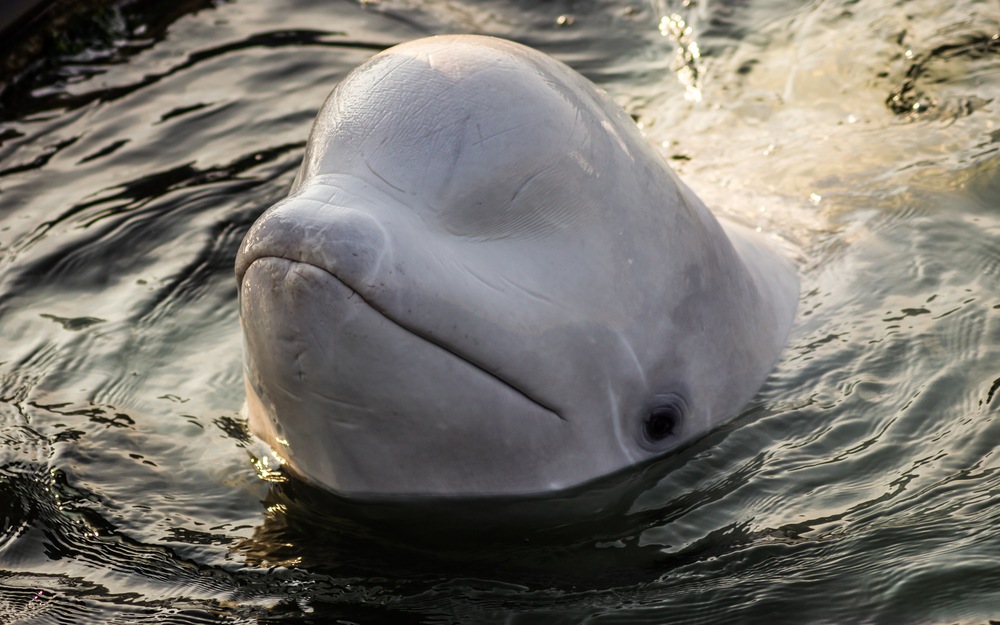 Beluga whales are smart, friendly‐faced, and— as it turns out—more humanlike than you might think!  In fact, if you run into one, you might just end up having some great conversation.  Read on to learn more about this one‐of‐a‐kind ocean dweller and its just‐like‐us persona…as well as a few choice spots to see one for yourself.

We already knew that belugas were intelligent—after all, whales are often compared to humans in terms of emotional understanding and language. But in 1984, researchers at the National  Marine Mammal Foundation learned that lesson first‐hand, when a beluga there got especially… chatty. A diver was in the tank with the beluga named “NOC” and heard someone calling for him— or so he thought. When he surfaced, he asked his fellow researchers who had told him to get out of the tank…but of course, none of them had. The loud, nasally voice sounded a bit like a kazoo— but under the water, it had a remarkably human quality, and was authentic enough to confuse the diver.   Through spending so much time with the researchers, it seemed that the beluga had picked up its own version of human language!

Getting to know the beluga whale

So—who is the beluga whale, anyway, when he’s not trying to blend in with human conversation?   While the beluga is also known as the “white whale” thanks to its characteristic coloring (or lack thereof), it is not actually the same white whale from Herman Melville’s Moby‐Dick. The beluga  whale is an oddity all its own, a species known for its wide variety of facial expressions (including  many smiles!) and ability to manipulate a wide range of sounds and “voices.”  They are friendly, hefty animals who are known to migrate to breed and shake off some dead skin against rock formations, as odd as it may seem. If you want to see them in action, it’s easier than you might think...

Where can you find the beautiful belugas in the wild? While they love the icy Arctic waters, you  don’t need to venture all the way to the North Pole to see them and say “hi.” One especially popular place to spot them in action is in Manitoba, off the shore of Churchill on the southwestern edge of Hudson Bay. Here, in the warm summer months, this social species gather in pods of 5 to  20, though the overall number of belugas passing through is in the hundreds. Local attractions here let you get especially up close and personal—you can even gently kayak throughout the bay,  slowly moving amongst the belugas like one of their own. It’s an unbeatable experience and a  truly unique way to spend your summer vacation. Who knew the beautiful beluga was so much like us? As you cruise, kayak and careen through the cool Canadian waters, keep your eyes peeled for the ocean’s friendliest face.

A Winter of Wakeboarding

Cruising Through The Mysteries Of Ancient Greece A Day At The Fair With Your Monterey Boat What Was The First Sunscreen Ever? This Easter, Get To Know The Sea Bunny Slug