We’re traveling to the South Bass Island Lighthouse on Lake Erie this week Did you know it’s the only lighthouse owned by a university? The Ohio State University was given full control of the lighthouse in 1997!

The South Bass Island Lighthouse was built in response to growing tourism on Lake Erie in the late 1800s. The Lighthouse Board approved the construction of a lighthouse on Parker Point to light the path between Sandusky and Toledo, Ohio in 1893. Unfortunately the lighthouse was not complete until 1897 due to construction setbacks brought on by several failed contractors. The final structure included a 2 ½ story brick house accompanied by a 3-story tower in the corner. The tower was built with a fourth order Fresnel lens that was later automated and then deactivated in 1962.

The keepers of the South Bass Lighthouse were plagued with tragedy in the beginning. The first keeper, Harry Riley, and his assistant, Sam Anderson were in charge of the lighthouse during a smallpox outbreak in 1898. Anderson’s fear of the disease turned to paranoia that year when it was reported by local papers that he was severely intoxicated, and hiding in the basement where he kept several snakes. Shortly after he went running into the lake screaming, his body was found the next day. The keeper was then recovered by police and committed to a state mental hospital where he died that March. A new keeper by the name of Charles B. Duggan was appointed to the lighthouse. He was killed in 1925 after falling from one of the islands cliffs.

Today the lighthouse is owned by the Ohio State University and is used to house researchers and staff. In 1990 the lighthouse earned its place on the National Register of Historic Places and is available for university scheduled tours. Have you toured the South Bass Lighthouse before? Share your pictures, and tell us more about your experience on our Facebook page! 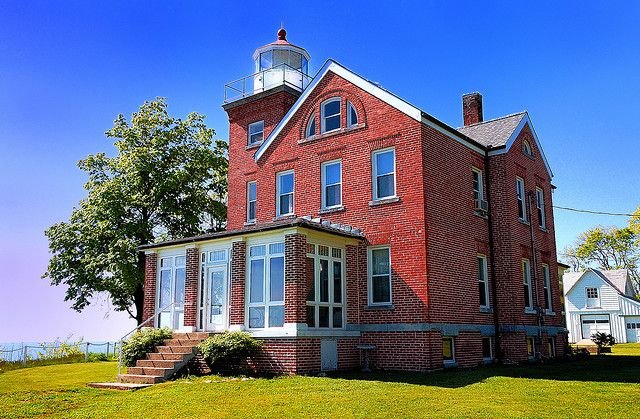