How many times have you heard the phrase, “Red sky in morning, sailor take warning; red sky at night, sailor’s delight”? We usually connect the famous saying with the sea, but did you know farmers used to use it too, and its origins date back to before Biblical times? Let’s take a look at what other sailing superstitions are really saying.

The Kraken is a well-known sea monster that originated in pirates’ stories around Norway and Iceland. It was thought to be a large, squid-like creature that would occasionally surface to attack passing ships. Today, it’s suggested that “creature” the old stories talk about might be little more than underwater volcanic activity—this would cause the bubbles and violent water movement attributed to the deep-sea monster. Kraken didn’t do so bad for itself, of course—today it is the namesake of a popular SeaWorld Orlando rollercoaster.

Kraken’s counterpart, the Loch Ness Monster, is one of the most well-known water-dwelling monsters across the world. Known as Nessie, this creature is thought to live in Loch Ness, Scotland. While many today insist that Nessie does exist—in fact, some point out that she might be a surviving plesiosaur from the dinosaur age—this monster, too, is usually accepted as folklore. But that hasn’t stopped believers from sharing photos of what they believe to be the Monster herself!

The Sirens, another malicious entity, were thought to lure sailors in with their beautiful singing, only to have the enamored sailors shipwreck on rocky shores.

It seems that many of the long-lasting maritime legends came about in order to explain perilous voyages and the mystery of the seas. In the case of the “red sky at night” rhyme, there’s actually some logic that backs up the idea: a red sky at night means the passage of a setting sun’s light through densely-packed dust particles, suggesting high pressure and generally good weather to come. In the morning, a rising sun can reflect dust particles of a storm system that has passed from the west, suggesting a possible storm arriving eastward. 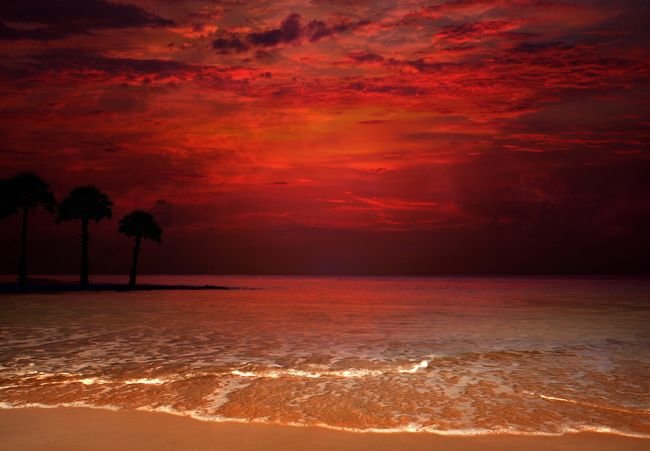 South Florida Boat Show and a Nearby Boating Haven

Looking to the Skies Boating Folklore: The Bermuda Triangle What's Behind a Red Tide? Meet the Oddball Olm: A Pint?Sized Aquatic Dragon