Today, Halloween is all about trick-or-treating, scary movies, costumes, candy and pumpkin-carving—but it wasn’t always all fun and games! For example, did you know that the holiday was first called “Samhain,” which means “summer’s end in Gaelic?” The most time-honored traditions have roots in beliefs and practices thousands of years in the making.

Jack-O’-Lanterns: People didn’t always carve big orange pumpkins—they used what they had on hand, which often meant smaller plants like turnips. The Celts, as legend has it, believed that putting their makeshift lanterns (made with scary faces, of course!) would help ward off evil spirits. This practice was carried over to the US when Irish families came to flee the potato famine of 1846.

Witches: It’s said that the stereotypical witch—with her pointy hat and long, scary nose—actually comes from a pagan goddess who was honored at Samhain. The goddess, known as the “crone” or “old one,” embodied wisdom and the switching of seasons. Today, she’s less revered and more of a symbol of Halloween ghoulishness!

Trick-or-treating in costumes: Celtic myth says that, during Samhain, the border between us and the spirits was at its thinnest—so, should ghosts decide to disguise themselves as humans and ask for money or food, people were prepared to give it to them! Another legend says that dressing up as a scary creature (like a ghoul, for example) would trick actual spirits. The practice today, of course, is a lot less scary!

Orange and black colors: The traditional orange and black associated with Halloween come from the pagan celebration of the switching of seasons and the harvest—orange for the color of crops and plants, and black for the “death,” or ending, of summer.

Night of Mischief: You probably know that Halloween is one night of the year when people—especially teens and younger adults—tend to be a bit mischievous. This rowdiness comes from celebrations of Samhain in the early 1900s, in which Celts would celebrate with vandalism, pranking and other activities. To put an end to this, adults would hand out candy and try to pacify rowdy teens—with this, the tradition of trick-or-treating was revived. 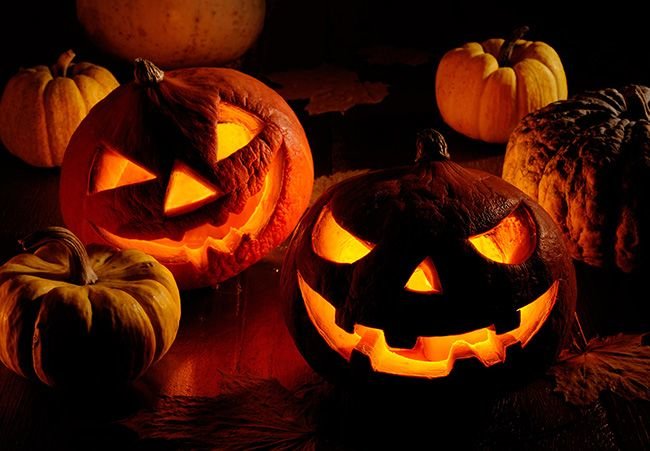